Kale is a super food and it is growing right here in Igiugig.  It is full of a lot of good nutrients.  All kinds really, but why fill this page up with words like riboflavin?  Celtic people in 600 B.C. were eating this stuff.  Celts are tough and one thing that made them tough was Kale.

The high school planted Kale last Spring in the downtown garden.  Tess took care of the garden over the Summer.  She watered it and spent quality time with the plants including Kale!

The Kale grew big and strong.  We harvested the Kale and Betsy’s elective cooking class made Kale chips.  They mixed the Kale with oil and spices and baked them at a low temperature.  They came out tasting like potato chips, but better because they were locally grown and made by Igiugig No-See-Ums instead of  a factory potato worker from Idaho who hates their life and job.

The chips were good.  Celtic good.  The chips were crunchy.  Oh yeh, in the garden we also planted potatoes, lettuce, mustard greens, and radishes.
Posted by Students of Igiugig School at 8:24 AM 1 comment: 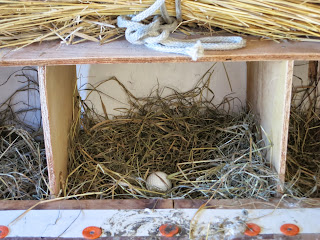 This year has been a fun year at my house. This is my first time having lots of animals, like 80 rabbits, 15 chickens, 2 pigs and 3 dogs. I have seen a lot of new things with all these animals around. One strange thing is this one chicken that is so entertaining and funny!
Over at our house there is the biggest yellow chicken that is sitting on a golf ball and not laying at all. So each day we have to go over and get the eggs. She growls at us when we come near her. Yeah I said growls. Sometimes she moves, so we have to check under her to see if there is an egg. She pecks at you if she gets the chance, and if you take the golf ball, she will peck at the golf ball. So you just throw it back. She also has no feathers under her belly. I saw it once and her skin was pink and looked like a roll of fat and was disgusting.
So if you want to see a chicken growl come over and see for yourself. Oh and talking about chickens don’t forget that we have eggs for sale and rabbits alive and dead. 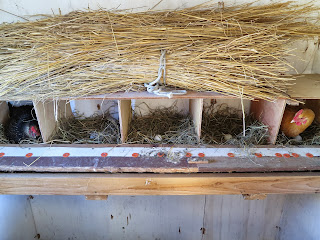 Posted by Students of Igiugig School at 2:57 PM 1 comment:

This year I was able to travel for sports, since I’m in the eight grade. We started out with Cross Country. For the beginning of practice we began with yoga for a couple of days. Then we ran around the airport a couple times. After that we ran to Sandy’s and back through Charlie’s and back to the school. It started to become a little bit harder because we had to run on the beach where there was sand.
Then on September 18th we flew to Newhalen because the Cross Country Race was going be there.  Around 1p.m we got there. A couple hours after we got there we walked the course. I was thinking, “This is so long I don’t think I’m going to be able to do this.”
After we walked the course we had dinner. Then we played an icebreaker, afterwards, we set up for Riflery. Riflery was okay but the first time I shot I smashed my finger in the pumping thing. After that we got ready for bed.
The next morning we all got up and ate breakfast. After breakfast we listen to this trooper talking about Initiative. I thought it was kind of unexciting and not really interesting.
I didn’t really pay attention to Initiative because my brain cells were too nervous for the race to start. It was starting soon, but it seemed like it was taking forever. Then our coach said that it was time for us to start warming up. We stretched a little bit and went for a quick run.
After that it was time for the race to start. The girls went first and there were nine of us. So Ed Lester lined us up at the top of the hill and counted down from ten. When he reached one, he blew a whistle for us to go. We started running the race and we were all going down hill so everybody was pretty fast. Then on the road I paced myself so I wouldn’t have to be stopping every time I got tired.
I was doing alright until the half way point where a girl passed me by. I looked to see if anybody was behind me and I saw this one girl who wasn’t too far back. I wasn’t going to let anybody else pass me so I kept my pace.
I felt so exhausted and couldn’t breathe.  My legs felt like they were about to give up. But I kept going till I got to the finish line. I got in fourth place. I could have gone to the regionals in Bethel if I was in 9th grade.
Next year I’m going to join Cross Country and try and do my best again. I thought it wasn’t going to be that fun joining Cross Country but I guess I was wrong. It was a good start to sports for me.

Posted by Students of Igiugig School at 2:46 PM No comments:

The Igiugig World Series is going to be great. The students have been practicing for a while on all of the season days.
Read more »
Posted by Students of Igiugig School at 2:47 PM No comments: