The Things We Did Yesterday

Yesterday our school (all 9 of us) went on a walk to a pond and caught 5 tadpoles. Then the little kids thought one was pooping, but its intestines were falling out. Then Andrew tossed the tadpole back into the pond. We continued to search for tadpoles and then we came back to school. First we studied them; we discovered that they were not tadpoles but they were in fact pollywogs. A pollywog is like a tadpole, but it has started to sprout legs and is bigger than a tadpole. When a tadpole becomes a pollywog it eats meat. We estimated that these pollywogs are between 97 and 105 days old. We also learned that there are only two kinds of frogs in Alaska: the wood frog (Rana sylvatica) and the boreal toad (Bufo boreas boreas). We observed the pollywogs and everyone made a prediction about what kind of pollywogs they are. But only time will tell. For now they're in a tank in one of our classrooms.


Enough about amphibians. Someone asked a question: what are no-see-ums? They are small, travel in the thousands and really drive people crazy. They're like mosquitoes, but a lot smaller; like a quarter of the size of a mosquito and their bites are bigger and hurt. So wear a bug net if you go outside in Alaska anywhere near a water source. They're so small that they get in every crook and nanny of your clothes, so you have to get a no-see-um net, not a mosquito net because they can get through mosquito net. You should get a bug jacket. Our school mascot is the no-see-um because there are so many around here.

Enough of these creatures. Let's move on to hunting season! Moose season starts on the first. [Blaise] I'm really excited to go hunting again. I hope I catch another moose. The moose I caught last year was really tender and tasted so good. [Kaleb] I hope my moose is bigger than your moose. [Blaise] Haha...very funny!

Caribou season is open, too.

Enough about hunting. Now about the traveling to the east coast! The LSAC, Local School Advisory Committee, has approved our travel to the east coast. We want to go to Boston for five days. We will take educational tours around Boston and do a cultural presentation to a class in Boston. And then we take the Amtrak to Orlando, Florida. We'll sleep in for a day because riding the train can make people tired. After we sleep in, we hit the beach to get some sun. (And hopefully we won't get burned.) And then we hit Universal Studios to check out where they create movies for a day. The next day we ride roller coasters at Universal Studios Islands of Adventure.

We need to raise about $50,000 for this trip. We will have lots of fundraisers, like movie nights, burger nights, spaghetti nights, selling stuff at carnivals, taming a moose and selling it on eBay (just kidding) and a fundraising website. We also have to convince our school board that this is a very educational trip, not just for fun, and a once-in-a-lifetime chance to explore areas we may never get to go to again. You can donate money at our website. It will be linked on our blog when we set it up.

Thanks for reading our blog. We really hope you enjoyed it.
From,
Kaleb and Blaise
Posted by Students of Igiugig School at 10:49 AM No comments:

Hi my name is Dan,

My teacher has told me to write something about our school on our new Blogger site.
This is my first blog ever and it is for our school which is not very big at all, in fact I think they will be closing our school down, unless everyone here has like four more kids... well, maybe not everyone here, just the ones who are old enough, you know what I mean.

This year there are only nine students in our whole school. Which can make it very boring at times, especially when the only other high school student is your younger brother, and the other seven students are younger than 12 years of age. Although being the oldest can have an upside to it, if you can find it.

Here is a photo of all the students 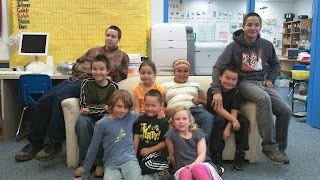 Front: Kaleb, Kelin, Kaylee
Back: Blaise, Caleb, Jolynn, Kiara, Aiden, Daniel
This school year should be a lot of fun for the younger kids! We are getting a school pet! Also there is a school trip planned for the end of the year. I think we will be heading to the East coast, which sounds pretty fun!! As of now, it looks like we will head to Boston then make our way down the coast to Orlando. We will be attending all sorts of tours, so it wont be a total waste of time.

Here a a couple of photos of the students 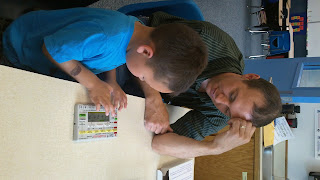 Here we have Keilan and our principal, Bill 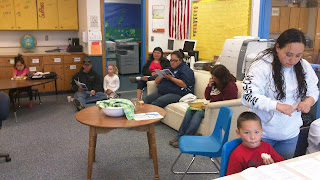 This is just a photo of some of the students with their parents
Posted by Students of Igiugig School at 2:34 PM 5 comments: