The New Road
Iliamna Lake Contractors are adding on to an old road for easy access to the barge landing.
The new road cost $85,000 and is getting paid for by the Indian Reservation Road program.  The road started getting built on August 15th, and was finished on September 7th.
The people who are helping to build the road are Jocko Neim, who is the mechanic, Steve Smith, who is the registered Surveyor, Gilbert Andrew, the Operator, Tony Wassilie the driver/operator, followed by William Nickoli, Stacie Garrison, Paul Hobson Jr., and Stacy Hill.
The road is 1600 ft. long (about 1/3rd mile).  They hauled the gravel from a gravel pit on the south end of the town.  The design of the road was planned for 2 ½ years and completed on December 8th 2010.  Some people thought it was going to be paved, but it will only be gravel.

Before the barge landing was built there was no public access to the beach.  The old barge-landing road crossed private property that washed out every year and was dangerous for hauling equipment over.  The biggest challenge with the new barge landing was securing Rights-of-Way through three different parcels of property.

Tribal Administrator AlexAnna Salmon thinks the new road is one of the prettiest roads in Igiugig.  Stacy Hill who operates one of the dump trucks thinks it was fun, but as they got further up the road it was nerve wracking, because if you backed up to far up you would drive off the road.  Everyone agrees it wills be nice to ride on the new road to the beach because the old road has been washed out and is sometimes hard to drive on.

If all goes according to plan, a 200 ft. long concrete ramp will be built at the barge landing by summer 2013.

Posted by Students of Igiugig School at 9:16 AM 1 comment:

Not So New Curfew

Why the “new” curfew? Some might ask (mostly teens). Actually, there has been a curfew in place since early to mid 2011. It has recently been enforced because kids were out later than they needed to be, and the Village Council doesn’t want the school attendance as poor as it was last year. The curfew ordinance was written not to criminalize, but to urge and build responsibility, though not everyone agrees that a curfew is necessary.
What are the consequences if someone is out after curfew? If a person under the age of 18 is seen out after 10 O’clock p.m. on weekdays and 12 a.m. on weekends. he/she will be brought home by the VPSO. The VPSO will then have a talk with his/her parents. Then the parents and offender will be brought before the Village Council to explain why the underage person was out after curfew. The offender will also be given a penalty: community service hours. But wait! There is a way to avoid all this, you could call VPSO Decker and give him a good reason why you’re going to be late or you could just be home on time!
The teens and adults of Igiugig feel very differently about the curfew. “It’s kind of lame,” one teen said.  While most teens don’t want the curfew to stay in effect and think that it isn’t necessary, others (adults) would call it a good thing. “As the writer of the ordinance, I think it’s good. It’s a good thing for kids to be home when they need to be.” Says VPSO Dan Decker about the newly enforced curfew. Some might not even care if there is or isn’t a curfew in effect and being enforced.
Either way, the curfew is being enforced and there isn’t really anything anyone under 18 can do about it. If you don’t want to get into trouble, don’t caught out after curfew, or just go home when it’s time (recommended). Even though some may feel very strongly, or not at all, about the curfew all it comes down to is responsibility. 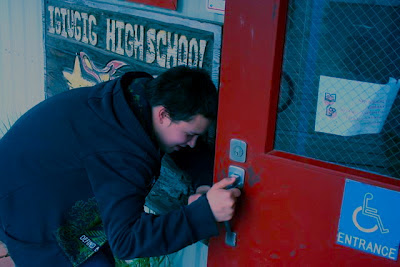 Posted by Students of Igiugig School at 2:53 PM No comments: